Who did the Gold Foil Experiment?

The gold foil experiment was a pathbreaking work conducted by scientists Hans Geiger and Ernest Marsden under the supervision of Nobel laureate physicist Ernest Rutherford that led to the discovery of the proper structure of an atom. Known as the Geiger-Marsden experiment, it was performed at the Physical Laboratories of the University of Manchester between 1908 and 1913. 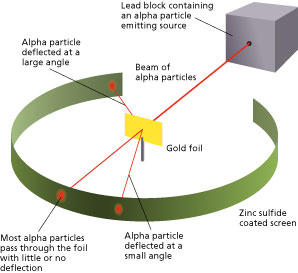 The prevalent atomic theory at the time of the research was the plum pudding model that was developed by Lord Kelvin and further improved by J.J. Thomson. According to the theory, an atom was a positively charged sphere with the electrons embedded in it like plums in a Christmas pudding.

With neutrons and protons yet to be discovered, the theory was derived following the classical Newtonian Physics. However, in the absence of experimental proof, this approach lacked proper acceptance by the scientific community.

What is the Gold Foil Experiment?

The method used by scientists included the following experimental steps and procedure. They bombarded a thin gold foil of thickness approximately 8.6 x 10-6 cm with a beam of alpha particles in a vacuum. Alpha particles are positively charged particles with a mass of about four times that of a hydrogen atom and are found in radioactive natural substances. They used gold since it is highly malleable, producing sheets that can be only a few atoms thick, thereby ensuring smooth passage of the alpha particles. A circular screen coated with zinc sulfide surrounded the foil. Since the positively charged alpha particles possess mass and move very fast, it was hypothesized that they would penetrate the thin gold foil and land themselves on the screen, producing fluorescence in the part they struck.

Like the plum pudding model, since the positive charge of atoms was evenly distributed and too small as compared to that of the alpha particles, the deflection of the particulate matter was predicted to be less than a small fraction of a degree.

The unexpected outcome could have only one explanation – a highly concentrated positive charge at the center of an atom that caused an electrostatic repulsion of the particles strong enough to bounce them back to their source. The particles that got deflected by huge angles passed close to the said concentrated mass. Most of the particles moved undeviated as there was no obstruction to their path, proving that the majority of an atom is empty.

In addition to the above, Rutherford concluded that since the central core could deflect the dense alpha particles, it shows that almost the entire mass of the atom is concentrated there. Rutherford named it the “nucleus” after experimenting with various gases. He also used materials other than gold for the foil, though the gold foil version gained the most popularity.

He further went on to reject the plum pudding model and developed a new atomic structure called the planetary model. In this model, a vastly empty atom holds a tiny nucleus at the center surrounded by a cloud of electrons. As a result of his gold foil experiment, Rutherford’s atomic theory holds good even today. 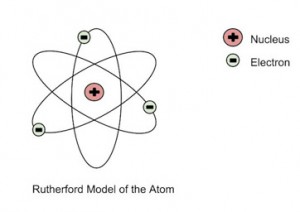 Why Does Oil Float on Water

© 2022 (Science Facts). All rights reserved. Reproduction in whole or in part without permission is prohibited.