Home / Chemistry / Why Does Water Expand When It Freezes

Does Water Expand When It Freezes?

Yes. Ice has a lesser density than water.

How Much Does Water Expand When It Freezes?

Why? – The Cause behind the Effect

On heating, liquids expand since the molecules move with greater energy overcoming the intermolecular attraction. On the contrary, liquids usually contract on cooling. It is because the molecules move slower and are not able to overcome the force of attraction between them. When they freeze, they contract some more to form a rigid solid structure with minimal intermolecular spaces between them. But that is not the case with water. Instead of contracting, it expands.

The water molecule, consisting of 2 atoms of hydrogen and one of oxygen forms a Mickey Mouse head-like structure such that the ears are the hydrogen atoms and the head is represented by the oxygen atom. The oxygen atom side of the molecule is slightly negative while the hydrogen atoms side has a slight positive charge. This makes the water molecules drawn towards each other forming hydrogen bonds. Upon freezing, the molecules set themselves in an arrangement that is very open in nature and contains more space than the water in the liquid state. Hence, water is said to expand on freezing and becomes less dense. On the other hand, it contracts on thawing, much unlike most other liquids.

How Does Water Expand When It Freezes?

In fact, water also shows the normal behavior of contracting due to cooling up to 4° C. But on cooling to temperatures below that, it starts expanding in volume. This is because the molecules start to get into a stable hexagonal lattice structure, as mentioned above. It is a very open structure with a lot of intermolecular space. Hence the expansion. The same applies when finally it freezes to ice at 0° C.

Is Water The Only Substance That Expands When It Freezes?

No, it is not. Other such substances include plutonium, germanium, bismuth, gallium, silicon, acetic acid, etc.

Here is a video explanation to make it simple for you.

This phenomenon, also known as the anomalous expansion of water is the reason why water bottles crack on freezing of the water inside. Another effect of this is the floating of ice cubes in water. It is because ice is of lesser density than water due to the reason mentioned above. 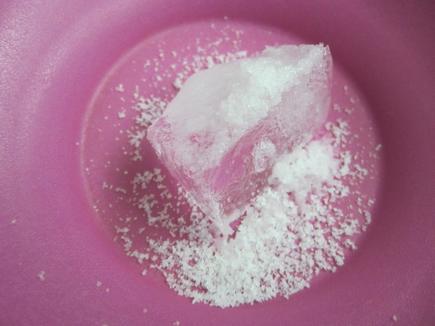